This is a new series in which I will be presenting and talking about books from Finland. First up: a very short introduction to Finnish literary history up until the 1980s.

Finnish literature might just be the next big thing. Sweden and Norway are both quite well established on the world literature scene after the successes of Karl Ove Knausgård, Jonas Jonasson, Henning Mankell, and many others, but Finland is still waiting for its big break. You might in the past heard the names of Tove Jansson (of the Moomins fame), Arto Paasilinna (who enjoys popularity in France), or more recently Sofi Oksanen. Pushkin Press published the YA novel Maresi by Maria Turtschaninoff a few months ago, and Aki Ollikainen‘s White Hunger (Peirene Press) was longlisted for the Man Booker International Prize 2016. Finland was also the guest of honour at the 2014 Frankfurt Book Fair. So much great Finnish literature is being translated right now, you really should stay in the loop!

If one was to make a forced comparison between Finnish and Swedish literature, it would be this: If it’s Finnish, it’s more likely to be what you might call strange, and what we’d call different. If it’s Finnish, it’s a bit offbeat, a bit less concurrent, a bit less harmless. Just think about the Moomins—their message is anything but conventional. I’m aware many out there would contest this national characterisation, but it’s also the one that FILI, Finnish Literature Exchange, which was behind the Finnland. Cool campaign at the Frankfurt Book Fair, promoted. Much of Finnish literature also deals with the effects that significant historical events have on the man in the street.

If there’s one thing literature written in Finnish can’t really boast about, it’s its rather short history, to a large degree due to Finland being a part of the Swedish realm until the early 19th century, and the language of civilisation Swedish. The stories in the Finnish national epic, Kalevala (five full English translations exist, the latest from 1989 by Keith Bosley for Oxford University Press), go back as many as 3,000 years.

The first novel of note published in Finnish was Aleksis Kivi‘s Seitsemän veljestä (Seven Brothers, translations into English from 1929, 1991) in 1870, and tells the story of, you guessed it, a band of brothers, all with a distinctive personality, living in a little village and ending up in all sorts of trouble. It’s a very humorous story that involves the brothers learning to read with great difficulty, burning up their sauna in a state of inebriation on Christmas Eve, and courting the village girls. 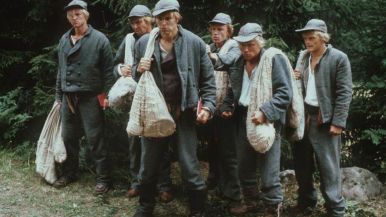 Just a bunch of Finnish lads. An image caption from the TV series Seitsemän veljestä (1989).

Kivi’s realistic portrayal of ordinary Finns wasn’t received favourably at a time when nationalist spirit required depicting the people in idealistic strokes, and though his novel is considered the work of a genius today, he died in poverty aged just 38. Many similarities here to Joseph Conrad‘s Youth: A Narrative.

Minna Canth (1844-1897) is one of the most considerable female voices in Finnish literature, in addition to being a journalist and a women’s rights activist—her birthday is celebrated as the day of social equality. 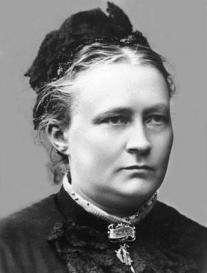 Canth’s play texts are in the genre of literary realism, and typically show women and the poor suffering in the hands of powerful men. Her best known plays are Anna Liisa, the story of a teenage girl who becomes pregnant by accident and kills the baby trying to avoid becoming an outcast in the village, and Työmiehen vaimo (‘The Worker’s Wife’, not translated into English), in which a drunk of a husband wastes all her wife’s money without her being able to legally stop him. The play caused a scandal and lead to changes in property law.

Finland won its first and so far only Nobel Prize in Literature when F. E. Sillanpää was awarded in 1939, and whilst his books that depict life in the Finnish countryside remain classics, they have fallen somewhat out of fashion. English translations exist from Hurskas kurjuus (1919, Meek Heritage, reviewed by Kirkus Reviews), Nuorena nukkunut (1931, The Maid Silja), and Ihmiset suviyössä (1934, People in the Summer Night).

The Roaring Twenties caused ripples even in faraway Finland. The motto of the Tulenkantajat (Flame Bearers) literary group was: “Let’s open our windows to Europe!”, and the authors did indeed spend time soaking up literary influences (and plenty of booze) particularly in Paris and Berlin. The writer, poet, essayist, and journalist Olavi Paavolainen was a key figure in the group. 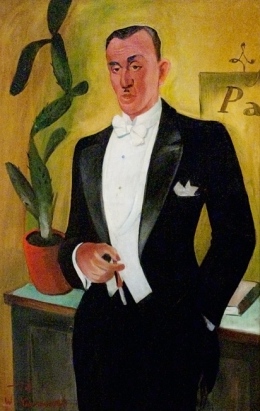 A dashing portrait of Olavi Paavolainen (1928)

Mika Waltari (1908-1979) was a hugely prolific writer who travelled in Europe at the same time as Paavolainen, and produced historic novels, travelogues, play and film scripts, detective stories, and poetry, among many other genres. Sinuhe egyptiläinen (The Egyptian, latest English translation from 1983 by Naomi Walford), the story of an Egyptian physician during the reign of Pharaoh Akhenaten, is undoubtedly his best known work thanks to both its sales figures and its quality, and was even made into a Hollywood film in 1954.

The film adaptation of The Egyptian

Waltari’s breakthrough novel was Suuri illusioni (1928, ‘The Great Illusion’, not translated into English), which he wrote aged just 19 whilst living in Paris. The book has drawn comparisons to F. Scott Fitzgerald. Waltari’s incredible versatility is reflected in another one of his popular books, the Komisario Palmu (‘Inspector Palmu’, not translated into English) detective novel series, which comprises three books’ worth of highly entertaining murder cases that take place among the depraved high society of Helsinki.

A very different type of a book from the same era is Volter Kilpi’s Alastalon salissa (‘In Alastalo’s parlour’, 1933—read an English excerpt by David Barrett in the Books from Finland blog), a Mrs Dalloway style novel describing six hours’ worth of negotiations on building a ship over 800 pages. It’s written in a stream-of-consciousness style à la James Joyce‘s Ulysses and famously so difficult to finish that if you do, you’re entitled to a T-shirt with the imprint: “I have read In Alastalo’s parlour“.

Mapping the Finnish past and present

The literature written in Finnish during and after World War II, in which Finland fought Russia, set out to discuss the effects of painful recent history and produced plenty of classics in the process.

Väinö Linna, whose background wasn’t in the traditionally learned literary circles—he’d worked as a lumberjack, on farms, and in factories—wrote some of the finest depictions of Finns, and indeed humanity, in his trilogy Täällä Pohjantähden alla (Under the North Star, translated by Richard Impola), published 1959–1962. The three tomes examine events in Finnish history, such as the pre-independence era in the late 19th century, the Civil War in 1918, and the Second World War, on a macro level. At the centre of the story are the generations of inhabitants in the imaginary Pentinkulma village, from representatives of the upper class, such as the dean and the baron, to the lowest of the low (the crofter’s family). Their interactions, objectives, and fates are intertwined with the grand ideologies (socialism, fascism) of the early 20th century, but also themes such as social justice, camaraderie, abuse of power, and so on. All Finns are familiar with the trilogy’s biblical opening sentence: “In the beginning there were the marsh, the hoe—and Jussi.” The publisher Bonnier has more information on the books.

Linna also wrote another undisputed classic, the World War II depiction Tuntematon sotilas (The Unknown Soldier, latest English version translated by Liesl Yamaguchi and published in 2015 by Penguin), which became a literary sensation immediately after it was published in 1954. It’s again a macro level look at the events of the Continuation War, fought between Finland and Russia as a part of the Second World War. The reader gets to follow the war efforts of a machine gun company whose members come from different parts of the country as well as different social classes, and who speak in distinct, regional voices. Linna wanted to tell a realistic story of war and morally ambiguous people’s reactions to it, not a smoothed out, romantic one of idealistic heroes. It’s a decidedly anti-war and anti-nationalism statement. You can read a review of Yamaguchi’s translation in The Asymptote Journal.

Similarly to Täällä Pohjantähden alla, Lauri Viita‘s debut Moreeni (1950, ‘Moraine‘, not translated into English) depicts the working class community in the suburbs of the industrial town Tampere, and is both a story of the neighbourhood, a Bildungsroman, and a macrohistory. Viita’s wife, Aila Meriluoto, is one of the country’s most popular poets. Eeva-Liisa Manner is also a poet, and can be classified as a postwar modernist.

Literature in Finland in the 60s reflected the attitudes of rebellious youth everywhere. Pentti Saarikoski (1937-1983) worked as a poet and as a translator. Despite his rather poor English skills, he went on to translate Joyce’s Ulysses and J. D. Salinger‘s The Catcher in the Rye—the translations were so loose they’ve sometimes been called cover versions. But no one could deny his fantastic feel for language, which he displayed for example in his breakthrough collection of poems Mitä tapahtuu todella? (‘What is actually going on?’, some of his works have been translated by Anselm Hollo), which came out in 1962.

Hannu Salama‘s book Juhannustanssit (1963, ‘Midsummer Dances‘, not translated) went as far as to give him a sentence on blasphemy in a country that was still very traditional—he was later pardoned by the president. Salama’s background was also in manual labour. Drawing parallels to Shakespeare‘s A Midsummer Night’s Dream, Juhannustanssit is a story of young people, the magical midsummer, and the ensuing love (and sex). 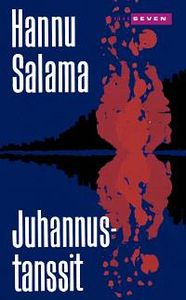 Timo K. Mukka, who lived in Lapland and died at the age of just 28 in 1973, also wrote about scandalous topics. Maa on syntinen laulu (‘The Earth is a Song of Sin’, not translated into English) was his debut aged 19, and deals with sex, religion, and death in a small village in Northern Finland. It probably avoided similar accusations of blasphemy only because all eyes were on the Salama case at the time.

Kalle Päätalo represented a more traditional take on literature. He, too, had a background in manual labour, and debuted as a writer in 1958. He produced what might just be the longest autobiographical series ever written: The Iijoki (‘River Ii’, not translated) books run over 26 volumes and 17,000 pages. Five of his books were translated into English in the 1960s.

This is obviously an extremely limited summary of some of the key authors writing in Finnish between the mid-1800s and the 1980s, and I hope to cast a light on many more in upcoming posts. I’ll also write at least one post on contemporary Finnish authors. In addition, there’ll be posts on the Finnish publishing industry and Finns as readers, which should be of interest for the industry professionals. And there will, of course, be book reviews. Watch this space!

One thought on “Haven’t you heard? It’s Finnish”