Kati Hiekkapelto (b. 1970) has an interesting background. She hails from the northern city of Oulu, and studied fine art and special education before working with immigrant children as a special needs teacher. She lives on a 200-year-old farm in the countryside, which means she gets to spend the long, dark, and cold Finnish winters not only writing, but also chopping wood and shovelling snow. Hiekkapelto speaks fluent Hungarian, thanks to having lived in the Hungarian-speaking part of Serbia. 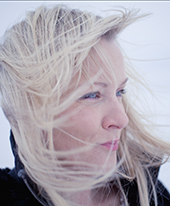 Hiekkapelto’s genre is crime fiction, the Nordic noir, and her heroine Anna Fekete, a 30-something detective whose family escaped Hungarian speaking Serbia to an unnamed city somewhere in northern Finland during the Yugoslav Wars in the early 1990s. The first book in the Fekete series, The Hummingbird (Kolibri), was published in Finnish by Otava in 2013 and in English a year later. The other two parts to come out so far are The Defenceless (Suojattomat, 2014), and The Exiled (Tumma, 2016). Hiekkapelto won the prize for the best detective novel, awarded by The Finnish Whodunnit Society, in 2015.